Lords of Sceptre, a one-act, three-man show, depicts the Golden Age of barnstorming baseball in Western Canada (1948-51)— a time when NHL superstars like Max Bentley, Gordie Howe, and Bert Olmstead and players from the Negro Major League fleshed out the roster of every competitive team. The Sceptre club, hailing from a town of less than 200, competed for the Western Canadian National Baseball Congress Championship in 1951 with the Indian Head Rockets, an all-Negro team imported from Jacksonville Florida. But their fiercest rivals came from just down the road – Delisle.
Lords of Sceptre is directed by Mark Claxton and performed by Mikael Steponchev, Tyler Toppings, and Legbo Menegbo. The 70-minute play is staged inside an imaginary ball diamond, with the actors playing multiple roles as well as baseball. Performances are followed by a short Q & A with the actors and the playwright Maureen (Mahaffy) Ulrich.
The script is based on interviews and conversations with former Sceptre first baseman George Mahaffy, the playwright’s cousin. Ulrich has a personal connection to this story as her father played with the team in 1946 and 1947. Her grandfather Harry Mahaffy was a financial supporter of the team. Steponchev will play both George and Harry.
Lords of Sceptre is not just about baseball. It’s about community and a unique time in our province’s history. It’s fast paced, family friendly, poignant, humorous and theatrical.
For show information, please contact Maureen at 306-487-7512. 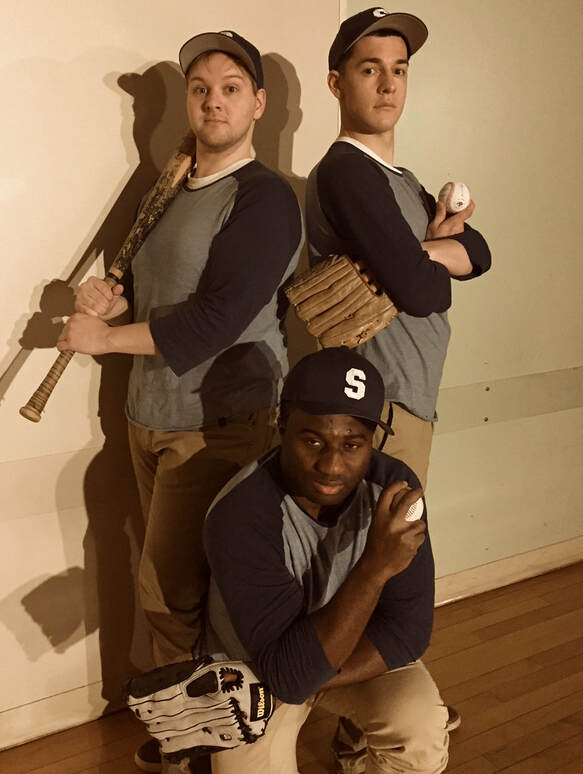 Please call Maureen at 306-487-7512 if you have any questions or would like to bring LOS to your community.