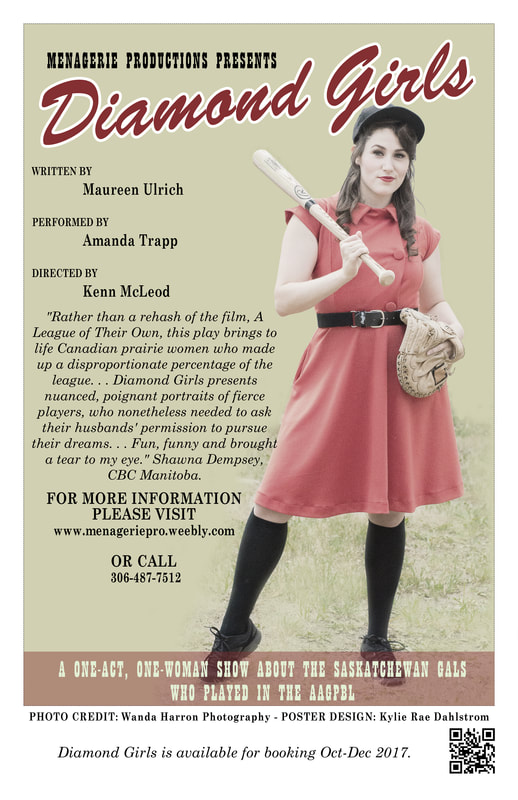 Penny Marshall’s A League of Their Own (1992) is a movie favourite for many, and certainly one for playwright Maureen Ulrich. Her one-act, one-woman show Diamond Girls portrays the twelve-year saga of Philip K. Wrigley’s celebrated All-American Girls Professional Baseball League, as seen through the eyes of three Saskatchewan players. Mary “Bonnie” Baker, Arleene Johnson Noga, and Daisy Junor all boarded the Sioux Line for Chicago to play with the South Bend Blue Sox or Muskegon Lassies.
One of the League’s most publicized players, Baker played nine years, making the All-Star team in ’43 and ’46 and becoming the AAGPBL's first and only female manager. In the summer of 2015, Ulrich saw a Leader Post article about the commemoration for Baker at Regina’s Central Park and got the notion to turn the topic into a play. Within a few months, the project became part of the Saskatchewan Sports Hall of Fame’s 2016 50th anniversary celebration.
Amanda Trapp  (Regina) plays all three women, as well as their families, Wrigley, some teammates and reporters, a chaperone, a manager, and a charm school instructor –twenty-one characters in total. The show is 60 minutes with no intermission.
Ulrich has written a number of plays and also published a girls’ hockey trilogy with Coteau Books. “I’m not an athlete,” Ulrich said, “but I’ve spent the last thirty-five years at baseball diamonds and hockey rinks. I wrote press releases for my husband’s ball team while they won six provincial titles. Diamond Girls has brought me back to a place in my writing that feels a lot like home.”
Diamond Girls is suitable for all audiences -- for softball or baseball fans young and old and for those looking for a theatrical experience. For more information, visit Menagerie Productions on Facebook and Twitter.